Elbphilharmonie Hamburg is giving away 1,000 tickets for the opening concerts 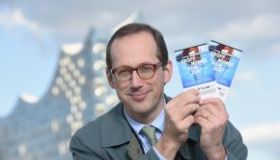 Online registration for the raffle opens Monday, May 9: lottery.elbphilharmonie.de/en

Hamburg/Los Angeles, May 6, 2016 - The clock is ticking: on January 11 and 12, 2017 the new landmark of the Hanseatic city of Hamburg, the Elbphilharmonie concert hall will celebrate its grand opening. Seats for the two opening concerts in the spectacular new concert hall on the river Elbe are highly coveted and not available on the free market. But the good news is: 1,000 exclusive tickets will be given away in a raffle. Anyone who wants to be there when the first notes are played in the Elbphilharmonie’s Grand Hall can now register online for the prize draw at lottery.elbphilharmonie.de/en.

General and Artistic Director Christoph Lieben-Seutter is looking forward to the winners: »With this prize draw, the Elbphilharmonie shows from the start that it’s a concert hall for everyone. We want to celebrate the opening not only with invited guests, but also with the people for whom the Elbphilharmonie has primarily been built: the citizens of Hamburg and music lovers from around the world.«

The opening concerts on January 11 and 12, 2017 will be performed by the NDR Elbphilharmonie Orchestra, under principal conductor Thomas Hengelbrock. The NDR Elbphilharmonie Orchestra will make its home in the Grand Hall. The opening program will be the same on both nights, although the details have not been disclosed. Five international star singers will perform as guest soloists: Anja Harteros, Wiebke Lehmkuhl, Philippe Jaroussky, Jonas Kaufmann and Bryn Terfel, as well as the future resident organist Iveta Apkalna. A new piece written especially for the occasion by perhaps the most important living German composer, Wolfgang Rihm, will be played on both evenings: »Reminiszenz. Triptychon und Spruch in memoriam Hans Henny Jahnn (Reminiscence, Triptych and memorial address for Hans Henny Jahnn) for tenor and full orchestra«. Jonas Kaufmann will perform as soloist.

1,000 tickets for the opening concerts to be given away by raffle – Registration online until July 7, 2016

The prize draw will be conducted via the web site lottery.elbphilharmonie.de/en, which goes live May 9, 2016, at 10 am. The site will remain online until the prize draw closes at 11:59 pm on Thursday, July 7.

Organised by the HamburgMusik gGmbH, the draw is for 900 tickets (450 x 2). A one-time interim draw on June 10 will determine the winners of the first 200 tickets from among the participants. Winners of the remaining 700 (350 x 2) tickets will be decided by a second draw after July 7.

Both draws will be random and supervised by a public notary. The winners will be notified in writing. Winners will not be able to choose between the two dates – January 11 and 12, 2017. Another 100 tickets will be given away worldwide by selected partners of the Elbphilharmonie Hamburg.

Registration is also possible by sending a postcard specifying the tag »Elbphilharmonie opening concerts prize draw« to HamburgMusik gGmbH, Dammtorwall 46, 20355 Hamburg, and must include entrants’ full name and address (and/or e-mail address).

Further information and the full terms and conditions for the prize draw will be available on Monday, May 9, 2016, on the web site: lottery.elbphilharmonie.de/en.

Anyone over 18 years of age is eligible to participate in the prize draw, with the exception of employees of the organiser, the company Elbphilharmonie und Laeiszhalle Service GmbH, and any co-operating partners/agency partners and their relatives.

All decisions are final.

With the opening of the Elbphilharmonie Hamburg on 11 and 12 January 2017, Hamburg forges its path as a city of music, once again demonstrating that the city is shaping its future based on contrast. Located in the HafenCity Hamburg district – Europe's largest inner-city development project between the Speicherstadt UNESCO World Heritage site and the port – this unique concert hall is emerging as a new magnet for locals and guests alike. The spectacular building comprises three concert halls with a diverse music programme, a comprehensive music education programme, a hotel, as well as the Plaza – a public viewing platform at a height of 37 metres that offers visitors an amazing view of the city and will open already on 4 November 2017.

Designed by renowned Swiss architects Herzog & de Meuron, the dazzling glass structure of the Elbphilharmonie Hamburg rises up to a height of 110 metres upon the former Kaispeicher A, a historic warehouse that was subsequently used for storing tea, tobacco and coffee. With its unique architecture the new concert hall represents the diverse, maritime flair of Hamburg – a city that is built on tradition and modernity and continues to successfully reshape its future by drawing on courage, creativity, innovation and cosmopolitanism. The Elbphilharmonie Hamburg symbolises the city’s ruggedness and beauty, these ubiquitous contrasts that are so characteristic for Hamburg’s appeal as the gateway to the world.

Further information, stories and tips on Hamburg by the Media Service of Hamburg Marketing GmbH on www.mediarelations.hamburg.de