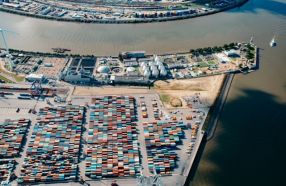 Hamburg, 30 May 2022 - At this year's Hannover Messe, the Hamburg Metropolitan Region will be introducing itself as the green hydrogen location of the future. The world's most important industrial trade fair will, at last, take place on-site at the exhibition grounds again and be held from Monday, 30 May, to Friday, 2 June. Hamburg will present solutions along the entire value chain. The focus will be on twelve hydrogen projects from the Hamburg Metropolitan Region which have been selected as Important Projects of Common European Interest (IPCEI Hydrogen) for extensive funding from the European Union. The Hamburg Metropolitan Region is already one of the leading hydrogen clusters in Europe. On the one hand, it impresses with its location as a major import logistics hub, and on the other hand, with the fact that a hydrogen economy with short distances is already being established. Hamburg will have its booth in the newly created "Hydrogen Hall", which is expected to attract visitors from all over the world for the first time this year.

"With wind power and hydrogen, the North will be setting the benchmark for future climate-friendly industrial transformation. Hydrogen technologies play a central role in climate protection in various transport applications. With the implementation of the Northern German and the National Hydrogen Strategy, the first important steps have been taken. Now we need a rapid market ramp-up and a scaling-up of applications," says Michael Westhagemann, Senator of Economics and Innovation of the Free and Hanseatic City of Hamburg.

Twelve hydrogen IPCEI projects to be showcased at Hannover Messe
From production, electrolysis and its industrial use to the creation of a network infrastructure and hydrogen import to the sustainable mobility of ships, aircraft or commercial vehicles - in the Hamburg Metropolitan Region, a powerful network is presently working on numerous hydrogen projects in various sectors. At Hannover Messe, a particular focus will be on twelve projects that cover different areas within a future hydrogen value chain and will be funded by state resources within the framework of the so-called IPCEI Hydrogen. These include the Green Hydrogen Hub Hamburg, the WIPLIN aviation project and the HH-Win infrastructure project in the Port of Hamburg.

Interactive touch table brings green hydrogen region to life
The visual centre of Hamburg's trade fair booth is an interactive touch table, which will be celebrating its premiere at Hannover Messe. With the newly developed device, Hamburg highlights the benefits of the metropolitan region and provides background information on key projects and players in the city. In addition, it shows developments in the field of hydrogen in numerous industry clusters such as aviation, the maritime industry and logistics. "This year, we have made the conscious decision to participate in the trade fair's newly created 'Hydrogen Hall' in order to bring both Hamburg and Northern Germany as a whole closer to the international industry - as a pioneering region for green hydrogen," says Dr Rolf Strittmatter, Managing Director of Hamburg Invest, who together with his team is in charge of the trade fair presentation.

Hamburg offers optimum conditions for the expansion of the hydrogen economy
An OECD study confirms that Northern Germany is particularly suitable for the development of a green hydrogen economy. The region has unique locational advantages for the production of renewable energies and a large potential for the purchase of hydrogen, especially from local industrial companies. It is also well-positioned thanks to the North German Hydrogen Strategy, thus playing a vital role in achieving the climate protection goals and the success of the energy transition in Germany. In addition, the Port of Hamburg is an ideal logistics hub for the import and distribution of green hydrogen to Germany and Europe.

To curb climate change, it is necessary to reduce greenhouse gas emissions. "In this context, hydrogen is more the sauerkraut than the champagne of the energy transition as it makes green electricity durable to allow it to be used in the energy system regardless of time and place. Without green hydrogen, the decarbonisation of certain industrial and transport sectors is hardly conceivable," says Jan Rispens, Executive Director of Branchennetzwerk Erneuerbare Energien Hamburg.

More information about Hamburg as a hydrogen hub: https://future.hamburg/en/gruene-wasserstoff-metropole