“Blue Port” Illumination starts spectacular Cruise Week in Hamburg: Seatrade Europe and Hamburg Cruise Days will transform the port of Hamburg into one big stage for the cruise industry 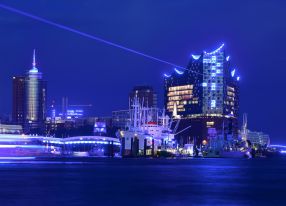 The Blue Port Hamburg installation designed by the light artist Michael Batz has been attracting international attention since 2008. Blue light once again transforms the Hanseatic city’s night-time port into a magically glowing stage. In 2017 the Elbphilharmonie Hamburg and a number of the other buildings in the Northern European City are bathed in mystical blue light until 10 September. The light up of the Blue Port started a spectacular week full of cruise events: “Seatrade Europe” Europe´s biggest cruise industry meeting, and the “Hamburg Cruise Days”, the largest public cruise event in the world, will transform Hamburg into one big stage for the cruise industry. This week highlights again Hamburg’s reputation as the world's number one in the area of maritime entertainment and cruise events.

It all began for Hamburg in 2006, when the FIFA World Cup took place in Germany. Light artist Michael Batz created "Blue Goals" - Goal Posts illuminated in blue, which public buildings, companies, and individuals used to decorate their roofs and Show off their excitement about having the World Cup in their Country. Hamburg then turned blue again in 2008, this time with the Blue Port Hamburg Installation. This year, Michael Batz is bathing the port in blue light for the sixth time.

Blue Port: A masterpiece in artistry and logistics

The preparations took an entire year, and the installation spans 8.5 kilometres along both sides of the Elbe. 50 kilometres of cable were laid down, 15,000 cable ties and 900 sockets were used and over 20,000 blue light elements were attached to distinct buildings, industrial plants and ships within the Port of Hamburg. The installation team often had to work at dizzying heights to put this all in place. The highest point is the Elbphilharmonie, the new concert hall and landmark of the city, the 110-metre-height roof of which now glows in new blue light. Also involved in this dynamic, spectacular installation are the Speicherstadt and Kontorhausviertel districts, which have been awarded world heritage status from UNESCO 2015. The Blue Port Hamburg is a complex ensemble of stable elements (quays, pontoons, terminals, buildings, bridges, towers, cranes, etc.), mobile elements (ships, van carriers, passers-by) and liquid elements (water, reflections).

Light artist Michael Batz has a particular way of describing the fascination that abounds: “The port – a place where everything that appears only has value once it disappears again. Light installations, which in their very nature are temporary, belong to this category. They glow and shine the brightest once the light has gone out. As fugitive reflectors of the world and of life in general, they mirror their darkest melancholy. And their deepest longing.”

Cruise Days: Hamburg turns blue for ten days and offers a stage for the cruise industry

The official light-up ceremony of Blue Port Hamburg took place on Friday evening last week. The sensory experience will be beguiling both locals and visitors from all over the world until 10 September, and – along with the Elbphilharmonie – is set to be one of the most popular picture-perfect spots in the city. The illuminated port will then take centre stage from 8 to 10 September, when the “Hamburg Cruise Days” are on. This weekend event is the largest cruise festival in the world, with eleven major cruise liners and more than half a million visitors to the Port of Hamburg expected to attend. Starting already on Wednesday the Cruise and River Cruise Convention “Seatrade Europe” brings together senior buyers, planners and key decision makers from Europe's ocean and river cruise lines with suppliers from all sectors of these industries for three days. Learn more about the Hamburg Cruise Days at www.hamburgcruisedays.de and the cruise destination Hamburg at www.hamburg-tourism.de/cruises.

More information and stories about Hamburg  for the media:  www.mediarelations.hamburg.de, more photo and footage: www.mediaserver.hamburg.de