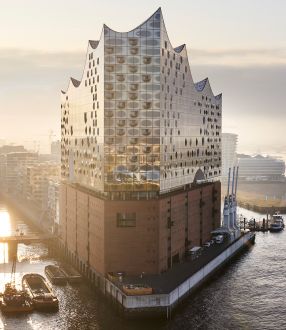 Hamburg, 09 March 2018 (HHT) – This week, visitors to ITB Berlin, the world’s largest tourism trade fair, will have the opportunity to experience the Elbphilharmonie Hamburg in 3D and in 360° views via an interactive mega touchscreen. The iconic new concert hall underscores Hamburg’s world repute as a dynamic city of music that doesn’t fit into any particular musical pigeonhole. Sometimes young, sometimes bold, loud at times, and certainly top-notch: Hamburg is always good for acoustic surprises and offers a wealth of music-related travel occasions – from great classical composers, the Beatles and the distinctive Hamburg sound to arguably the most vibrant music scene in continental Europe – as well as exciting festivals such as the MS Dockville and the Reeperbahn Festival.

At this year’s ITB Berlin, the Hamburg Tourism Board will be presenting the music city of Hamburg and will be providing a foretaste of music-related events and occasions lined up for 2018. Firmly anchored in Hamburg’s cultural and urban landscape, the Elbphilharmonie has become an integral part of the city’s music scene. Tickets for the upcoming 2018/19 season will be on sale from August and are once again expected to sell out quickly.

Hamburg’s festival summer will be kicked off with the 3rd Hamburg International Music Festival. Taking place from 27 April to 30 May, this year’s festival will revolve around the core theme of “Utopia”. With 41 different programme items and 61 concerts, Hamburg will be transformed into one big music stage during the festival. Venues will include e.g. the Laeiszhalle, St Catherine's Church, Kampnagel, the Mehr! theatre as well as the Elbphilharmonie Hamburg. www.musikfest-hamburg.de

China Moses, Marius Neset & Guests, Theo Croker & DVRK FUNK and Nneka are but a few of the acts lined up for the 2018 ELBJAZZ Festival taking place on 1 and 2 June. As part of the festival, some 50 live concerts from different varieties of jazz and crossover genres can be experienced against the unique backdrop of Hamburg’s port. The festival’s open-air and indoor stages are located at some truly unexpected venues, and of course the Elbphilharmonie will also be part of the game. www.elbjazz.de

With venues ranging from idyllic castles to cool industrial halls across the Hamburg Metropolitan Region, the federal state of Schleswig-Holstein and even parts of Denmark, the Schleswig-Holstein Musik Festival (SHMF) is famous for its one-of-a-kind atmosphere. At this year’s festival, which will be held from 30 June to 26 August, the main focus will once again be on classical music – and yet other genres such as pop and jazz will also be featured. Thus, there will be the opportunity to experience artists such as Pat Metheny alongside classical stars such as Jonas Kaufmann, Sol Gabetta, and Anna Netrebko. The 2018 SHMF programme pays special tribute to Romantic composer and musical writer Robert Schumann. www.shmf.de

Young, bold, loud and arty – that’s the essence of the MS Dockville festival on the Elbe island of Wilhelmsburg. Taking place from 17 to 19 August, this open-air music and art festival will feature bands such as ALT-J, Fink, Honne, and Everything Everything and is sure to attract a cool crowd. www.msdockville.de

Taking place from 19 to 22 September, the Reeperbahn Festival was first held 13 years ago and has long become an essential part of the international festival calendar. Today, Europe’s biggest club festival has come to represent Hamburg’s spirit as a live music location. With more than 900 programme items and numerous locations across the St Pauli neighbourhood, the festival provides a stage for up-and-coming bands and established artists alike. Catering for a broad range of music styles, this year’s festival will yet again include the Elbphilharmonie Hamburg, which will serve as a venue for even two days of the festival. www.reeperbahnfestival.com

An audience of 850,000 people in the first year alone, and sold-out tickets for almost every single concert of the current season ending in June: the Elbphilharmonie’s impressive track record confirms that the run on Hamburg’s new concert hall continues further. The Elbphilharmonie’s concert programme is just as contrasting as Hamburg itself and includes e.g. orchestral concerts, concert opera performances with some of the world’s finest orchestras, piano sessions, song recitals, and string orchestra performances – as well as world music, electro and pop concerts. The Elbphilharmonie’s heartbeat draws from international stars just as much as outstanding artists and ensembles from Hamburg, most notably the NDR Elbphilharmonie Orchestra, the Hamburg Philharmonic State Orchestra, and the Ensemble Resonanz. The 2018/19 season starts in August, and the programme – as well as the dates for the advance sale of tickets – will be released in May. www.elbphilharmonie.com

Hamburg has a long history of classical music: Europe’s first public opera house at the Gänsemarkt square opened its gates as early as 1678. The Composer’s Quarter in the Neustadt district was inaugurated in 2015 and is situated in close proximity to St Michaelis Church, Hamburg’s principal church. Comprising several museums, it was established by a consortium of dedicated citizens and local initiatives to honour all those composers who were born in Hamburg or played a major role in shaping the city’s music landscape – among them C. P. E. Bach, Johannes Brahms, and Baroque composer Georg Philipp Telemann.

The Composers’ Quarter is now being extended even further, as another three famous composers will be featured here from 29 May 2018: Fanny and Felix Mendelssohn, who were greatly influenced by their childhood in Hamburg, as well as Gustav Mahler, who served as chief conductor at the Stadttheater Hamburg and who played a crucial role in shaping Hamburg’s late 18th century musical life. Two entirely new interactive exhibition areas will be dedicated to presenting their lives and work in Hamburg. www.komponistenquartier.de

Many more Hamburg tips for download or online at the following websites: