Hamburg is bringing back the summer: URBAN.SHORE presents the rawness and beauty of Hamburg’s waterside 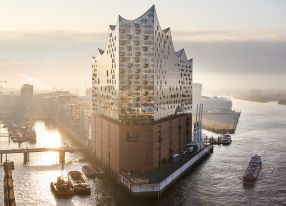 Lively city districts and many places of interest line themselves up along the banks of Hamburg’s Elbe, where water and urban life meet: from the Hafencity with its newest landmark, the Elbphilharmonie, through the UNESCO World Heritage Site of the Speicherstadt, the world-renowned St. Pauli pier and the fish market to the beaches of the Elbe in Ovelgönne and Blankenese. The southern bank of the Elbe shows the rough industrial romanticism of Hamburg Harbour and, together with Wilhelmsburg, Hamburg has Europe’s biggest river island, enlaced by remarkable waterways and forested areas.  In addition, there are countless exciting maritime events directly on the water or close to it: classic events like the Hafengeburtstag (harbour birthday), romantic cruises during the Hamburg Cruise Days, musical highlights like the Elbjazz Festival and young, wild events like the art and music festival MS Dockville.

Hamburg´s URBAN.SHORE represents Hamburg life next to the Elbe: The authentic people. The ships. The busy harbour. Buildings with panoramic views. The beaches inside the city. The omnipresent water. It stands for a sense of home and wanderlust. For tradition and innovation. For something that is constantly in motion and yet still exudes tranquillity.

A one and a half minute trailer is the core of the campaign. It shows the similarities and contrasts of the city and the Elbe.  Both characters in the film, Maischa Pingel and Erkan Cakir, embody two different characteristics of Hamburg: she is calm and balanced, like the water.  He is pulsating and restless, like the big city.  In the increasingly faster sequences, the two protagonists get closer and closer to each other, approaching from opposite directions on the city’s coast, until they meet in the plaza in front of the Elbphilharmonie: two people, so different, yet so closely connected.  Like Hamburg and the Elbe. Hamburg´s URBAN.SHORE.

The main film is complemented by six 360° videos, containing further story elements, together with the two main characters. The viewer is then able to choose which perspective they wish to see:  the fish market, the Elbphilharmonie, Jenischpark, the Elbe beaches, the piers or the Speicherstadt.

The main film, the 360° videos, as well as many exciting photos and stories can be found on the Internet page www.hamburg-tourismus.de/urbanshore or by using the hash tag #urbanshore.

More information and stories about Hamburg  for the media:  www.mediarelations.hamburg.de, more photo and footage: www.mediaserver.hamburg.de