Hamburg’s Media-Makers on the Road to the Digital Future

Hamburg's reputation as a leading media location is largely based on prestigious print publications and major publishing houses. And yet Hamburg‘s media scene is setting the course for the future – an overview of old and new players from Hamburg’s media sector.

While the digitisation of the media market has caused uncertainty among many publishers and journalists, Hamburg celebrated a special anniversary in late 2014: the news website “Spiegel Online” hosted a party on the occasion of its 20th anniversary. On the premises where news is reported around the clock, the entire staff, from editors to interns, danced until the early morning hours. As one of the first media companies worldwide, the weekly news magazine “Der Spiegel” took its first steps on the internet by launching “Spiegel Online” in 1994. And their pioneering spirit has paid off: with more than 11 million unique visitors per month, “Spiegel Online” is the market leader in digital communications and by far the most successful quality news site in Germany. At the same time “Der Spiegel” also serves as a platform for various conventions, where the future of online journalism is discussed.

With more than 3,000 companies in the areas of press and broadcasting, Hamburg is one of the best places in Europe to observe the media market’s digital revolution. Nearly three-quarters of Germany’s 25 highest-circulation publications are created here. Hamburg is not only home to the Spiegel and the ZEIT publishing houses, but also to the Gruner + Jahr publishing house, which was established in 1948 by Henri Nannen and currently publishes some 500 print and online products around the world. Hamburg is a popular location for film and television productions, offering unique scenery with its 24-hour port operations, the vibrant Reeperbahn entertainment mile, the historic Speicherstadt warehouse district and the innovative HafenCity Hamburg district. The public radio and television broadcaster NDR also has its headquarters in Hamburg. From here, the NDR broadcasts “Tagesschau”, Germany’s most successful television news show, and its digital offshoot “tagesschau.de” is yet another digital news flagship produced in Hamburg. A variety of educational institutions, among them the prestigious Henri-Nannen-Schule, ensure a constant flow of highly qualified young journalists.

In addition to up-and-coming journalists, fresh ideas and innovative concepts are becoming ever more important for today’s media locations. The digital science magazine “Substanz” may serve as an example here. It was founded by Denis Dilba and Georg Dahm – a duo that truly represents the new entrepreneurial spirit among German journalists. Both started their career in a traditional publishing house, where they witnessed the termination of several print publications. In response, they established their own publishing company, aptly named “Fail Better Media”. It turned out to be the right decision: in 2014, Denis Dilba and Georg Dahm started Germany’s biggest crowdfunding campaign. Nearly 600 supporters invested more than 30,000 euro to help launch the publishing company and the magazine. In addition to “Substanz”, more and more young, confident media start-ups have entered Hamburg’s long-established media market, a market that can look back on more than 100 years of publishing.

Pay or Share: Pay or Share, one of Hamburg’s up-and-coming media start-ups, describes Hamburg as “a hugely attractive mix of innovative Fintech and gaming stronghold and traditional media location.” Pay or Share aims to reconcile digital consumer behaviour and market rationale: if a user reads digital content but doesn’t want to pay money for it, the user can instead pay by sharing the content on social media platforms. Co-founder Fiona Brandes feels that Hamburg’s ecosystem is perfectly suited to their company. “What is more, Facebook and Twitter are just around the corner. This means: short distances in all directions,” she comments with a view of the two USdigitalgiants, which havechosenHamburgas the location for their German headquarters.

Meedia: Each month, around half a million internet users visit Meedia.de. The media portal describes itself as a comprehensive source of information for anyone interested in the media industry. The company was founded in Hamburg and aims to document, explain and comment on the digitisation of the media and the transformation of the media industry. Media-makers, advertisers and corporate communications experts use the service every day to get an insight into tomorrow’s media world.

The new Next Media Accelerator programme serves as a helping hand for these innovative media enterprises in particular. Initiated by the German Press Agency (dpa), it is arguably one of Germany’s most exciting projects dedicated to the future of the media. In collaboration with renowned partners from the media industry, the programme has been supporting new business models by media start-ups in the areas of content, advertising and services since 2015. The location of Hamburg is at the heart of the concept. On behalf of the dpa, Jennifer Schwanenberg is paving the way for the Next Media Accelerator in her role as media innovation manager. The programme focusses on establishing relevant contacts rather than providing financial support. Thus Jennifer Schwanenberg points out that the dpa’s links to all of Germany’s publishing houses, which have been fostered over 60 years, are the biggest forte for participating start-ups. “We know what media companies need, we are close to the start-up scene, and we can swiftly establish links. The fact that many of our potential partners and target groups are Hamburg- based is our strongest asset.”

The Next Media Accelerator thus promotes the growth of a colourful new media scene. Young digital enterprises are benefitting from the proximity of major publishing houses such as the Bauer publishing house, which was established in 1875. Today, Bauer Media is Europe's largest magazine publisher. New conference formats from the digital industries, among them the Scoopcamp and the “Vocer Innovation Day” at the “Spiegel”, reflect the close links between traditional publishers and young innovative media-makers. With some 250 participants from media and IT, the Scoopcamp is considered to be Germany’s leading conference for innovation in the online media sector. The Scoopcamp invites experts, decision-makers and innovators to discuss their ideas with media and IT pioneers from around the world. The systematic integration of content and technology is supported by the Hamburg Senate through the “nextMediaHamburg” initiative, which was relaunched in 2014. “Hamburg has the potential to continue its role as opinion leader in the content industry: hardly any other city in Germany offers such an excellent combination of skills and know-how at the interface of content and technology,” says Hamburg's First Mayor Olaf Scholz.

When it comes to developing innovative business models in the media industry, the greatest potential lies in learning from each other and from related fields such as the digital and creative industries. Marketing, PR and advertising agencies have been among the first to discover digital channels and to develop successful online formats. With around 19,000 jobs, Hamburg is one of the most important German locations for these industries. No other German media city has such a broad range of relevant and profitable media industry branches. As a “city of content”, Hamburg is therefore predestined to demonstrate the opportunities emerging from digitisation and media convergence. 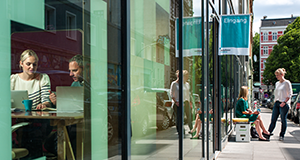